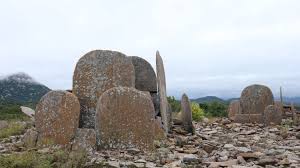 Plopped up on my couch enjoying a lazy day (most days are…he he he😛😁 😋) I came across a word ‘’Dolmen’’ – Ahh ! Dolmens ! What are they?! …the article said that ‘megalithic dolmens are the main attraction in some parts of Europe and UK’. A tiny bulb glowed inside my head – I remembered seeing a place named Mallachandram Dolmens, two weeks back when I was planning to climb the Krishnagiri Fort to explore the ruins.

A quick search surprised me with their antiquity – Megalithic age, Neolithic era, iron age, pre iron age….in simple terms more than 4000 years ago ! That’s something really antediluvian and archaic! Oh wow! And so much closer to home. Google search did not yield more information on the Krishnagiri ones. Why ? Shouldn’t these be on the protected monument list of ASI ? (Archaeological Society of India).

Some theories call these as ‘’dwellings of dwarfs’’ while some others state that they were ‘’burial chambers of prehistoric civilians’’. The locals referred to these as ''ancient temples''. The dolmens are 3 ft– 4 ft in dimension on all the sides. I was totally intrigued and eagerly waited for the rain gods to give us a break!

Google maps took us almost closer to the spot, while the locals guided us in the right direction. The hillocks lie well inside complete wilderness and shrubbery, thick and overgrown due to incessant rain. There are no boards or markings to guide you. The trek through the jungle path was exciting and short – soon we were in a wild meadow with hillocks on all sides…

We explored the area to get near the hills and ascended one of them...disappointed😥..... completely damaged dolmens! We tried another hill...yeaa...better...it had quite a few, some in good condition while few are in ruins. Dolmens have vertical gratine slabs on four sides covered by a top stone. Few dolmens had a circular opening / window on the side. We noticed few figurative cave paintings resembling a man hunting an animal. In one area, a bigger, double stoned dolmen was surrounded by 12 smaller ones - could that be a leader and his fellowmen around ?!

The view from the top of the hills was amazing. Several verdant rolling hills and slopes with white washed houses in between made up a pretty picture. There were more dolmens on an adjacent hill for which we could not find a way through the undergrowth. All four types of Dolmens are found here and is an attraction for historians and archaeologists.