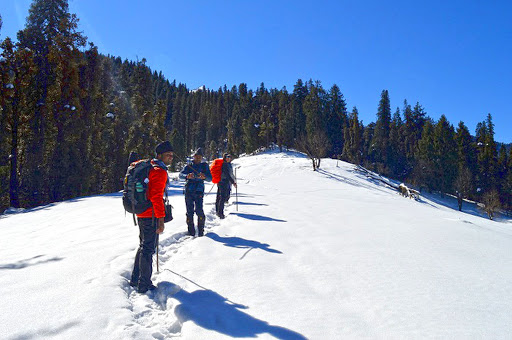 Recently I went on a life changing trek with my friends to Kedarkantha. It was a spell bounding experience and it changed my perspective on life as a whole. We were a group of four people who decided to fully utilize our last year in college and our Christmas vacations, before we knew it a fully-fledged plan emerged. The trip was spread over the span of 10 days and we left in the early morning hours to catch a flight to Dehra-Dun where we joined our trekking group. We went with a trekking group famous for its outdoor adventures and nature trails. There, a group of 20 people who had never met each other before came together as one family.

Our trek started with a steep ascend to our first base camp. The nature beckoned to us and we became one with the mountains. The trail on the first day was grassy and had spectacular views, our trek leader and guide taught us about the various peaks of the Himalayas and the legends associated with them.

When we finally reached the basecamp for the first day after five hours of strenuous trekking, there was hot “Chai” waiting for us along with sandwiches, which the porters had made for us. The campsite was set up on freezing cold snow which was easily 5 feet deep. The sunset that night was surreal, it was the first time in my life that I had witnessed such a starry, clear sky and shooting stars. At night the temperature dropped down to -2 degrees and all of us froze. We had 4 layers of clothing on and still the cold winds would give us the chills.

The day of the summit was the hardest as we had to reach the kedarkantha peak of 12,500 feet and come back down to the basecamp. We left at the break of dawn to catch the sunrise from the top of our summit. The climb up was so tiring and difficult, we were constantly motivated by our trek leader and the other guides. Towards the end of the ascend my body was giving up, but the desire to not give up and accomplish this feat took over me. The picturesque mountain drop with fresh white snow, treaded on only by our footprints gave me a story to tell for years to come. There was no human life around me for at least a 50 km radius.

Finally I could see the summit in front of me, my four friends and I pushed each other throughout the trek and in the final moments of the trek also motivated and pulled each other up to the top of the Kedarkantha mountain. The view from the top was absolutely worth the entire difficulties faced by us over the past few days. Hours of training for this trek and facing the extreme weather all paid off. We spent around half an hour on the summit taking photos and revisiting the memories of this trek before heading back to our basecamp. I can definitely say that this was the best trip of my entire life, my friends and I became so much closer after this experience and I gained a whole new perspective of how I am just a tiny speck in this great universe.