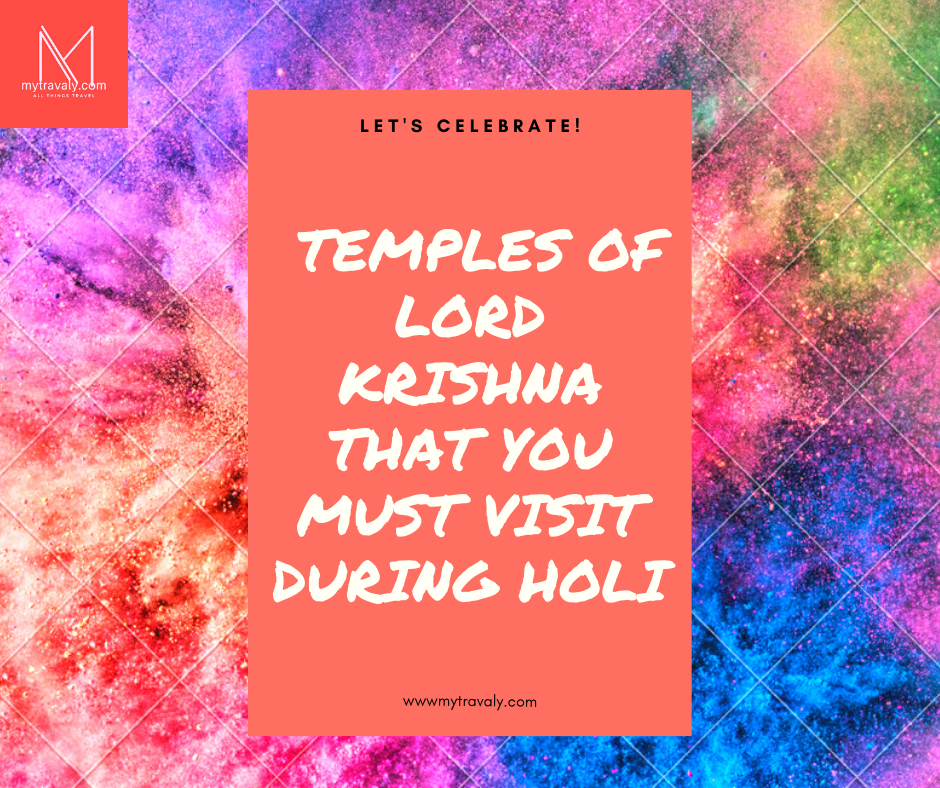 Festivals are a reflection of the customs and culture that are central to any destination. These not only assure moments of joy and excitement but; also offer a ready glimpse into the traditions that have been kept alive for ages.

Holi, known as the festival of colours in India, evokes many emotions and excitement among people. The festival of Holi spreads vibrancy and happiness all over the world. It comes in the spring season on the full moon during Phalguna.

The festival is attributed to the love of Radha and Krishna and it is celebrated with joy.

No doubt why Holi is one of the most loved festivals in India because there are ample numbers of traditional places you can visit during Holi. People love sticking to their roots and celebrate the festival with Lord Krishna.

Just like Krishna possesses several roles, here is a hand-curated list of Lord Krishna’s temple you must visit to celebrate joyous Holi:

If you want to witness live glory, visit Dwarikadhish temple in Dwarka. No journey to Gujarat is complete without a visit to Dwarka. It is said that the temple was constructed by Lord Krishna’s grandson 2500 years ago. On the day holi, it gives immense pleasure to eyes when you watch devotees’ offers prayers and Holi colours to their Govinda. The festival starts few days Holi accompanied by many rituals and on the final day, devotees and attendees throw Gulaal in all directions and greet each other. They also dip in holy sacred tanks to show their faith and spirituality. Celebration of Holi at Dwarikadhish Temple is a treat

One of the most famous ancient temples of Lord Krishna, it is considered to be a very important temple when Lord Krishna’s name is taken. In BankeBihari, they play Holi very uniquely with Flowers. If you visit few days prior to the festival, you can enjoy the very famous “Phoolon wali Holi”. They shower different kinds of flowers in 20 minutes and that aura is impeccable. The entire view is so different and it becomes a perfect picturesque place. On the day of Holi, the priests throw buckets full of colours on the devotees followed by which, people sing and dance on devotional music. This is a way of showing their faith and love for ‘Kanha’. Traditional Krishna Leela is also performed the very next day

To experience Holiness in the pink city of India, one should visit Govind Devi Ji temple as holi here extends for an entire week. A three-day cultural festival is organized and traditional dance forms are performed. Music also comes in the way. After this, a two-day ‘Fagostav’ in which Krishna Leela is portrayed by dance drama. A Variety of Rajasthani dances are performed by folk artists. The dance styles include Ghoomar and some popular folk songs. Here also they use flower petals on the day of Fagotsav and everything around looks so elegant. The temple administration organizes Gulaal Holi which is played inside the temple premises. People also enjoy the presence of Lord Krishna.

At Mathura, Lord Krishna’s birthplace, you get to witness something very unusual yet very peaceful. A string of joy and essence of true culture is what you will experience there. A day before Holi, the Holi precession is done from Vishram Ghat to Holi gate in the afternoon which is a treat to watch. On the grand finale day, a gala festival celebration happens at the Dwarikadhish temple which one can regret missing. A crowd of devotees gather outside the temple and perform various traditional dances and sing songs. They beat drums and throw colours at each other. After the ‘dwaar’ of the temple opens, the devotees can join the priests and perform rituals. ‘Gujias’ and ‘Bhaang’ also remain a part of their celebration which is a major add-on.

Shrinathji Temple is situated near Udaipur and Holi is a very important festival there. The grand celebration happens 2-3 days before Holi but the celebration starts picking up one week in advance. Devotees accompanied by their friends and families, visit the temple during Holi and witness the amazing enthusiasm. Not only the temple, but the entire town gets colourful as a huge amount of watercolours and Gulaal is thrown around. The priests of temples also play Holi with Abeer and Gulaal with the devotees. On the day of Holi, the entire morning people play Holi in the town and then reach the temple in the afternoon for Darshan. The darshan is whole-heartedly done by the devotees and one must visit here once in their lifetime.